It’s been a very unusual 12-plus hours for fans of Universal Hollywood’s Halloween Horror Nights, and the weirdness may not be over.

Late last night, a little Twitter fun was had with a fake rumor about the next maze announcement for HHN Hollywood based on a “monster boy” favorite film if you grew up in the 1970s.

Well this morning HHN followers and fans were a bit stunned by Universal’s announcement via Facebook that the newest maze theme reveal is a Universal Monsters Remix, collecting the studio’s roster of classic monsters and dropping them into a dubstep dance party this Halloween.

Creative director John Murdy tweeted this morning that the reveal would be made but has been offline since, so he personally has yet to confirm this maze theme is actually a fact and not the prank many first suspected it was.

Was the joker playing a practical joke on HHN devotees with this improbable mix of monsters and dubstep dance music? Nope.

Sites began reporting the press release (below) from Uni announcing the maze. Even the logo art above has been installed on USH’s HHN website, rotating in the mix of other confirmed maze themes for 2012. Smirking suspicion as turned to some shocked reactions and disbelief among fans and Twitter feeds have bumped up the hot SoCal temps by a couple extra degrees already. Believe it or not, I can confirm this theme is real.

Now the intriguing question remains: how might this unconventional Monsters Remix theme work for HHN this season?

1. THE ‘CURSE’ OF HOH: I love HHN and so I can fondly admit that often the haunt mazes which occupy the House of Horrors venue ‘struggle’ to succeed completely in their intended overhaul. Ever since HoH took over from the VAN HELSING-inspired attraction, it’s been a hodgepodge of Universal Classic Monsters, VAN HELSING reboot monsters and various Universal horror licenses (how else can you explain the presence of Chucky from CHILD’S PLAY?).  Last year’s installment of THE WOLFMAN movie theme in HoH struggled again to ‘own’ the space, since so much of it was built for another completely different film and even that concept has been modified since the 2010 remake. Perhaps Murdy and the creative team decided to sidestep this ‘curse’ of retheming HoH all together by dubstepping it into a Monster Mash dance party? If you can’t beat it, embrace the attraction’s design limitations and enhance them with a totally different concept layer on top of the Dracula, Frankenstein and Wolf Man props for a completely new maze effect.

2. EXPECT THE UNEXPECTED: remixing Frankenstein’s monster and his Bride, Dracula and his batty babes, the Phantom and Wolf Man with a dubstep dance theme is the definition of an unexpected surprise in HHNworld. Look at the online reaction today, much of which on the official Facebook page was surprisingly hostile by many fans who reject the concept on its face without seeing it in action. Murdy and his team can’t afford to remake HHN every year with minds that closed to new possibilities. Think of it this way: with such a ‘strange’ and unconventional maze theme, for once HHN-goers will have no way to predict what might happen in the Remix maze now. HoH maze themes always suffered from fans’ familiarity with the attraction that’s open year round — they know the built-in themes and layout of various set pieces before they walk in the front door. That makes it twice as difficult for a HHN maze theme to surprise them amid such familiarity with the HoH venue itself. With such a wide open theme as this Mad Monster dance party, all bets are off regarding what you’ll see inside Universal Monsters Remix and what awaits around every corner. Theoretically, anyway. A theme so open to interpretation and design could yield very unexpected results and, finally, a HoH maze could surprise guests in 2012. That, in its larger sense, would be a very welcome addition to HHN Hollywood, and I’m all for it. 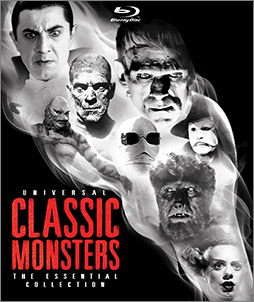 3. All HHN and creature feature fans should have October 2nd marked on their calendars as that’s the day that UNIVERSAL CLASSIC MONSTERS: The Essential Collection debuts 8 immortal monster movies on Blu-ray including DRACULA, FRANKENSTEIN, THE MUMMY, THE INVISIBLE MAN, BRIDE OF FRANKENSTEIN, THE WOLF MAN, PHANTOM OF THE OPERA and CREATURE FROM THE BLACK LAGOON. Do any of those film titles sound familiar in the cast of the Monsters Remix maze theme? Whether the maze is an intended cross-promotion with the Blu-ray set release the same month or not, the synergy of celebrating Universal’s greatest, most time-honored film characters amid the studio’s 100th Anniversary celebration cannot be denied as a logical move. These Universal monsters live at the core of the studio’s existence today and history over the past century, so why not let Drac, Frank, Wolfie and the Phantom party like it’s 2012 in current dance style. Some critics today said that dubstep is already passé (or that it plain sucks), but music is an even more particular taste than a love of horror films and haunt events, so as many guests might like the party atmosphere as those who deride it. After a small bit of online research, I learned that dubstep’s origins and influences had some darker musical influences that, given the right selection of dubstep tracks, could fit the monster theme better than naysayers expect — especially with the promised samplings of classic Universal horror film lines of dialogue (and maybe video too).  Would you prefer Frankenstein Autotuned?

I can see how this Monsters Remix theme could work well for HHN, or at least that it might work if created with imagination and fearless experimentation. There’s no guarantee it will work and become a hit with fans, but I applaud John Murdy and his team for taking a bold step and preventing Halloween Horror Nights from becoming a stale annual event that plays scares by the numbers until Southern California gets bored and it dies off. None of us want to see that happen, and I think as long as Murdy keeps experimenting with what HHN can be, as long as he keeps taking some reasonable risks to try very new ideas, he will keep the event growing and pleasing fans for years to come. It’s true you can’t please everybody, but most often you fail when you play it safe to try pleasing everyone with the lowest common denominator. That approach would be a truly scary prospect for Halloween Horror Nights.

I’m willing to give this experiment a try and see how it works when the maze and cast are actually scaring HHN fans on their feet, not judging it by a few sentences online. Give it a chance, horror fans.  See you in September.

An Extreme Experience Infusing Next Generation Monsters with

Universal City, California — Universal’s infamous legacy of horror will come to an afterlife in “Universal Monsters Remix,” an all-new terrifying experience that re-imagines the classic horror icons of yesteryear for the 21st century and immerses them in the twisted confines of electronica-inspired music during “Halloween Horror Nights®” at Universal Studios HollywoodSM.

Set within the antechambers of an eerily gothic castle, the new “Universal Monsters Remix” maze will unleash a cast of movies most legendary creatures, including Frankenstein’s Monster and his Bride, Dracula and his Brides, Phantom of the Opera and The Wolf Man.  From deep within the stone fortress, accompanied by ominous strobe lighting effects, guests will traverse dark and dank arteries of rotting catacombs, hallowed underground crypts and pagan sacrificial burial chambers.  Laced with the murmur of dialog from Universal’s catalogue of horror films, guests will be besieged by the relentless sounds of high-energy, horror-inspired dance, dub-step and industrial music.

“Halloween Horror Nights” experiences will include an immersive new maze, “The Walking Dead:  Dead Inside,” based on AMC’s critically-acclaimed, Golden Globe®-nominated and Emmy® Award-winning TV series; “Welcome to Silent Hill,” based on the popular video games and film franchise; a new maze by legendary shock rocker, “Alice Cooper Goes to Hell 3D,” and a reimagined “La Llorona: Cazadora de Niños” maze, based on the terrifying Mexican and Latin American legend that has terrified children for centuries.  An all new “Terror Tram:  Invaded by The Walking Dead” attraction, also inspired by the TV series, will invite guests to navigate the haunted environs of the world-famous movie and television studio backlot and come face to face with hordes of flesh-eating, blood-drooling and groaning “walkers.”  Additional haunted attractions to be announced shortly.

The theme park’s favorite thrill-ride attractions will also remain open during “Halloween Horror Nights,” including the popular “Transformers™: The Ride—3D,” “The Simpsons Ride®,” “Revenge of the MummySM – The Ride” and “Jurassic Park® In the Dark.”