Fans of horror films and TV horror hosts alike, mark your calendars for February as the inimitable, indomitable Count Gore De Vol celebrates his 40th anniversary of scaring up laughs with classic creature features. On February 1, 2013 at 7:30pm, the Count will host HOUSE OF FRANKENSTEIN — the first film he ever hosted on Channel 20 in Washington D.C. in 1973 — in front of a mostly-alive audience at the AFI Silver theater in Silver Spring, MD. Tickets for this one-night only special event   are now available to order online from the AFI website. Prices are: General Admission $11.50, Children $7.00, Seniors $9.00 and there’s no booking fee, so dig in you Gore groupies!

For those who haven’t experienced it already, HOUSE OF FRANKENSTEIN is Universal’s monster rally sequel from 1944 starring Boris Karloff, Lon Chaney Jr., John Carradine, Lionel Atwill, J. Carrol Naish, Glenn Strange and Anne Gwynne, mashing up Dracula, The Wolf Man, mad scientists and of course Frankenstein’s Monster. Count Gore will be hosting the screening live, adding his own commentary and wise cracks for some bloody good fun. Don’t miss this if you’re in the Maryland area, or plan on making a pilgrimage if you’re a Gore De Vol devotee.

The Count just released this video preview of the event to whet your undying appetite: 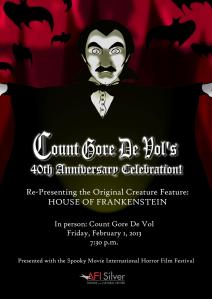