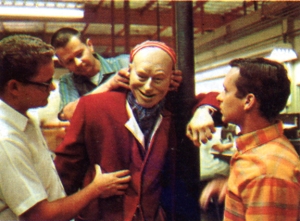 Roger Broggie Jr. (right) and two other Imagineers test out an audio-animatronic figure for The Pirates of the Caribbean attraction.

Imagineer and Disney theme park engineer Roger Broggie Jr. has died at the age of 73. According to this LA Times obituary, Broggie died of complications from a head injury suffered on December 11th when he fell off a parade float under construction near his home in LaPine, Oregon. The Broggie family announced his death last week.

Roger Jr. was the son of an original Imagineer and his father, Roger Sr., first introduced him to Walt Disney in the 1950s when the pair tended to the miniature railroad in the backyard of Disney’s Holmby Hills residence. The son eventually worked with his father in WED machine shop and became one of the engineering innovators of Disney’s audio-animatronic figures that populated legendary attractions such as Great Moments With Mr. Lincoln, the Enchanted Tiki Room, Pirates of the Caribbean and the Haunted Mansion.

Broggie also was the mechanical wizard who brought Herbie the Volkswagon to life on the big screen in Disney’s 1969 live-action film THE LOVE BUG. Roger Jr. joined forces with two other former Imagineers to start their own company in the 1970s, contributing numerous engineering designs to Rose Parade floats and later fabricating the spaceship that featured prominently in the 1984 Summer Olympics closing ceremony spectacular.

SWSC salutes Roger Broggie Jr. on his numerous contributions and innovations in theme park design, specifically his audio-animatronic engineering of characters in attractions like Pirates of the Caribbean and the Haunted Mansion that have been so inspirational to my own career in themed entertainment.

For more life and career details, including information on a February 2nd memorial service, please read the Times’ obituary article linked above.