A giant bust of the film’s star is mobbed by fans at the May 1933 run of KING KONG at the Pomona Fox theater.

Time for a recap of Sunday’s 80th Anniversary screening of the original classic film KING KONG held at the Pomona Fox theater in Southern California, where the epic monster movie first debuted in May 1933. The afternoon event was attended by Kong fans and scholars of every age, and all enjoyed the main attraction screening (even if it was a DVD presentation and not film) which only proved that Willis O’Brien‘s stop-motion giant ape remains the undisputed king of fantasy cinema.

KING KONG, co-directed by Merian C. Cooper and Ernest B. Schoedsack, hasn’t lost any of its vintage style appeal and Depression-era moxie as a very American-made tale that still appeals to moviegoers around the world. It’s a rip roaring adventure yarn paced within an inch of its 100-minute life, and chock full of ingeniously devised set pieces that continue to thrill audiences and inspire visual effects technicians eight decades later.

Prior to Sunday’s screening, a myriad of Kong tribute sculptures and props, vintage production art and stills displayed in the theater lobby gained attendees’ interest for education and photo ops. Items included a large, dynamic sculpture recreating Kong’s battle atop the Empire State Building against the attacking biplanes, a stop-motion Kong puppet recreation, two bust sculptures of Kong’s head, a recreation of Kong’s hand and arm suitable for photo op posing, and a small-scale reproduction of the life-size Kong bust featured in the film’s close-up shots of Kong’s head. Select photos of these items appear at the bottom of this article for a sampling of the Kong-inspired talent and artistry on-hand for this anniversary event.

The KONG anniversary event concluded with excerpts from two documentaries: a 20-minute sampling of Steve Austin’s yet-unfinished biographical documentary CREATION: THE LOST WORLDS OF WILLIS O’BRIEN detailing in vintage photos, clips and interviews the animation artist’s life and career; plus disc-scanned scenes from a 1999 PBS IMAX production SPECIAL EFFECTS: ANYTHING CAN HAPPEN in which Ben Burtt and other technicians attempted to recreate Kong in stop-motion animation utilizing current tools and methods of the time. Austin’s O’Brien documentary was enticing and quite educational about the man’s unpredictable life experiences before his most famous works were achieved — now if only Austin could get the funding and resources to finish the project. I wish him the best on that goal! The PBS show seemed quite outdated by now in its wide-eyed approach to defining and glorifying 1990s-era visual film effects (leaving aside the proliferation of CG effects so commonly used today), and despite all the artisan’s well-documented talents, their attempt to animate their own Kong tribute short only emphasizes the character-creating genius of Willis O’Brien and his KONG cohorts.

I also got to chat with Frank Dietz and Trish Geiger about their upcoming documentary LONG LIVE THE KING – THE LEGACY OF THE MIGHTY KONG which is now in production. Both filmmakers were taping interviews with the panel members for their documentary due to premiere a bit later this year. Scheduled interview subjects in LONG LIVE THE KING will include Rick Baker, Greg Nicotero, Bob Burns, Tom Woodruff, William Stout and Mike Hill among many others. Those of you who have already seen their previous film BEAST WISHES, about sci-fi/fantasy collectors Bob and Kathy Burns, will know that Dietz and Geiger’s knowledge on these subjects is only surpassed by their passion as filmmakers to share these people and stories with everyone. KONG is a favorite topic of them both which should make their new film a very exciting project to watch for in 2013.

In all, the afternoon was a fun and worthwhile celebration of KING KONG’s cinematic innovation and legacy that still shapes fantasy entertainment today. Despite sequels and spin-offs of both ernest and dubious quality, after two very high-profile remakes by producer Dino De Laurentiis in 1976 and uber-director Peter Jackson in 2005, and appearances in Universal Studios theme park attractions, no subsequent effort has ever successfully recaptured the pure-hearted magic and mystery that Cooper and Schoedsack’s 1933 original unleashed upon audience’s imaginations. I was most encouraged to see quite a few young kids in the audience, not only attending the screening but responding so enthusiastically to an 80-year-old black-and-white fantasy film. I suspect most of today’s “monster kid” generation — i.e. now-middle aged movie fans who grew up watching KONG on a local station’s Million Dollar Movie airings or such in the 1960s or 1970s — first encountered KING KONG at similarly tender ages when movies equated to dreamlike magic in our lives and opened our minds to worlds unseen, both terrestrial and imaginary. If even a few of the kids at Sunday’s screening take KING KONG into their hearts and minds as we have, Kong will live on for a few more generations and retain his crown as king.  Long may he reign. 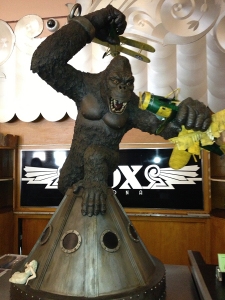 Small recreation bust of the full-size Kong figure made to tour with KING KONG’s theatrical run in 1933, along with vintage photos and Jim Danforth attempt to recreate the lost Spider Pit sequence 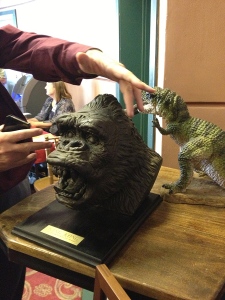